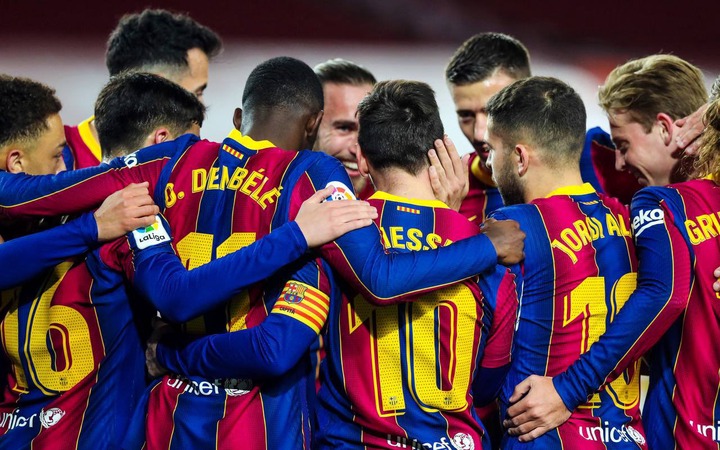 Barcelona desperately needed a win to move up to second place in the Laliga table, but Valladolid was having none of it.

Plano, on the other hand, was given his marching orders in the 79th minute for a rough tackle on Dembele. At the 90th minute, Dembele, who had been brimming with confidence all evening, was in the right position at the right time to slam a left-footed volley into the bottom left corner of the post for the game-winning goal.

Dembele was named Man Of The Match after playing in all three front positions for the duration of the game, switching places with his teammates.

This season has been incredible for the France international, who was on the verge of being shipped out of Barcelona in the summer transfer window. The Catalan club’s management has taken notice of his improved form and consistency in recent matches and is considering extending his deal to keep him at the club for longer.

His injury problems seem to be behind him, as he exudes optimism and demonstrates why FC Barcelona paid such a high price for him.

They are now in second position, two points behind league leaders Atletico Madrid and two points ahead of their eternal rival Real Madrid.

Barcelona’s next match will be against a bitter rival in an el clasico match that the Catalan club hopes to win.

Please leave your comments in the box below, as well as like and share this article with your coworkers and friends.

Tao - November 25, 2022 0
Jamopyper, who recently signed with Zanku Records, makes his debut on the music scene with the intriguing song “Cubicle.” Furthermore, “Balance,” his prior offering, is...

How Yemi Alade was robbed in Cote d’Ivoire || Read Details

Jada P controlling emotions after Wizkid claimed to be single

Chinko Ekun Shares Tough Stories He Went Through After He Became...

How Yemi Alade was robbed in Cote d’Ivoire || Read Details

Jada P controlling emotions after Wizkid claimed to be single